Verse of the Week Commentary: Daniel 9:25

“So you are to know and discern that from the issuing of a decree to restore and rebuild Jerusalem until Messiah the Prince there will be seven weeks and sixty-two weeks; it will be built again, with plaza and moat, even in times of distress. Daniel 9:25

(The majority of the footnotes are from the Ryrie Study Bible. They are footnotes in his Bible that provides further enlightenment on Scripture passages quoted in our discussion.) 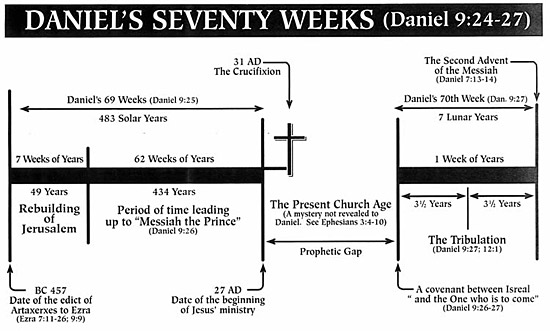 “So you are to know and discern that from the issuing of a decree to restore and rebuild Jerusalem until Messiah the Prince there will be seven weeks and sixty-two weeks; it will be built again, with plaza and moat, even in times of distress. Daniel 9:25

You are to know- The angels urge Daniel to take note and be aware of the exact calculations involved, for it proves that God’s prophetic word will be fulfilled to the day!

Decree- Literally, “word” and may be rendered “commission” or “commandment.”

Decree to restore and rebuild Jerusalem- The seventy sevens begins with this decree, the commandment of Artaxerxes Longimanus given in 445 BC, after the request of his servant, Nehemiah:

And I said to the king, “if it pleases the king, and if your servant has found favor before you, send me to Judah, to the city of my father’s tombs, that I may rebuild it.” Nehemiah 2:5 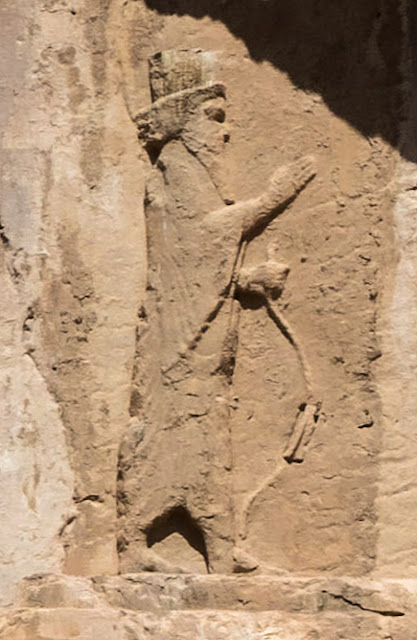 Figure 1Artaxerxes I at Naqsh-e Rostam
Earlier, Cyrus had authorized the rebuilding of the temple in 538 BC:

22 Now in the first year[1] of Cyrus king of Persia- in order to fulfill the word of the LORD by the mouth of Jeremiah- the LORD stirred up the spirit of Cyrus king of Persia, so that he sent a proclamation throughout his kingdom, and also put it in writing, saying,
23 “Thus says Cyrus king of Persia, ‘The LORD, the God of heaven, has given me all the kingdoms of the earth, and He has appointed me to build Him a house in Jerusalem, which is in Judah. Whoever there is among you of all His people, may the LORD his God be with him, and let him go up!” 2 Chronicles 36:22, 23 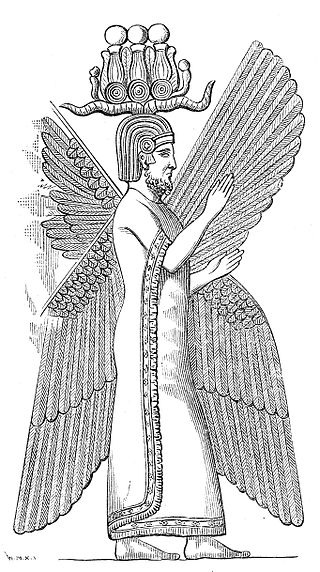 The decree was to fulfill Jeremiah’s prophecy that after seventy years Jews would be to return to the land. This decree related only to the Temple and says nothing of the restoring and rebuilding the city. The 490 years were not to begin until a royal commandment was given to rebuild the Holy City.

Another decree was issued by Darius the Mede in 519 BC. We read in Ezra:

“And now, if it pleases the king let a search be conducted in the king’s treasure house, which is there in Babylon, if it be that a decree was issued by Cyrus to rebuild this house of God at Jerusalem; and let the king send to us his decision concerning this matter.” Ezra 5:17

Then King Darius issued a decree, and search was made in the archives, where the treasures were stored in Babylon. Ezra 6:1

Permission was sought be the Jews to return and rebuild the Temple was questioned by those in opposition, so a search was made of the treasure house which also held the official state documents. He found a parchment upon which Cyrus had recorded the first decree seventeen years previously. Therefore, Darius made his own decree to show he favored the first decree.

A third decree was recorded in Ezra:

11 Now this is the copy of the decree[2] which King Artaxerxes gave to Ezra the priest, the scribe, learned in the words of the commandments of the Lord and His statutes to Israel.
12 “Artaxerxes, king of kings, to Ezra the priest, the scribe of the law of the God of heaven, perfect peace. And now
13 I have issued a decree that any of the people of Israel and their priests and the Levites in my kingdom who are willing to go to Jerusalem, may go with you. Ezra 7:11-13

This permitted the Jewish priests and Levites to return to Jerusalem for the reinstitution of Temple services. It also provided for funds to be drawn from the Persian treasure to finance the project, including animal sacrifices. The emphasis of this decree lay in the adorning and strengthening the temple at Jerusalem. But his third decree, like the two preceding it, concerned only the Temple.

Old Testament history gives us only one decree to rebuild the Jerusalem walls and that is recorded in Nehemiah 2:1-8. The event began:

And it came about in the month Nisan [March] in the twentieth [445] year of King Artaxerxes, that wine was before him, and I took up the wine and gave it to the king. Now I had not been sad in his presence. Nehemiah 2:1

The king was probably more afraid that Nehemiah’s health was bothering him, possibly a poisoned winecup, and therefore the king was in danger. But he asked “why” Nehemiah responded:

And I said to the king, “Let the king live forever. Why should my face not be sad when the city, the place of my father’s tombs, lies desolate and its gates have been consumed by fire?” Nehemiah 2:3

Nehemiah requested time off to go and rebuild the city of Jerusalem which the king granted. Then armed with letters:

7 And I said to the king, “If it pleases the king, let letters[3] be given me for the governors of the provinces beyond the River, that they might allow me to pass through until I come to Judah,
8 and a letter to Asaph the keeper of the king’s forest, that he may give me timber to make beams for the gates of the fortress[4] which is by the temple, for the wall of the city, and for the house[5] to which I will go.” And the king granted them to me because the good hand of my God was on me. Nehemiah 2:7-8

The date happens to be one of the best-known dates in ancient history. The Encyclopedia Britannica set the date of Artaxerxes accession at 465 BC, and his 20th year would be 445 BC. The first of Nisan would be March 14, 445 BC. This is the starting point of Daniel’s 70-week prophecy. Dr. Alva J. McClain wrote:

“For those who believe in biblical inspiration and the genuineness of predictive prophecy, it will be no surprise to learn that the date fixed by Nehemiah happens to be one of the best known dates in ancient history. Even the Encyclopedia Britannica, certainly not biased in favor of prophecy, sets the date of Artaxerxes accession as 465 BC; and therefore his twentieth year would be 445 BC; the month was Nisan, and since no day was given, according to Jewish custom the date would be understood as the first. Hence in our calendar the date would be March 14, 445 BC. Here we have the beginning of the Seventy Weeks.”

To calculate the END of the 69-week prophecy, we should the number to DAYS. The formula is:

Another way of calculating this ending point is through the western calendar system. Sir Robert Anderson, for many years head of England’s Scotland Yard, in his classic The Coming Prince, made an intricate study of this subject and concluded that April 6, 32 AD was the exact date on which Christ-fulfilling Messianic prophecy- entered Jerusalem on the foal of an ass and offered Himself to the nation as their Messiah and King. As it is record in Zechariah:

[6]Rejoice greatly, daughter of Zion!
Shout in triumph, O daughter of Jerusalem!
Behold, your king is coming to you;
He is[7] just and endowed with salvation,
Humble, and mounted on a donkey.
Even on a colt, the foal of a donkey.[8] Zechariah 9:9

Although Christ had on several occasions forbidden His disciples to thus acclaim Him, now He rebuked the Pharisees for protesting the acclaim of the people saying:

And He answered and said, “I tell you, if these become silent, the stone will cry out!” Luke 19:40

Thus, the 173,880 days of the 69-weeks prophecy actually ran their course to the very day!

Messiah the Prince- This is NOT an allusion to Antiochus Epiphanes or the Antichrist. This is Jesus Christ Himself.

With plaza and moat- The public square and moat were rebuilt by the time the first 7 weeks (49 years) were completed. This expresses the completeness of the restoration of the city. Including the places of resort and the thoroughfares leading to them.

Even in times of distress- Gabriel prophesied the construction would take place in troublesome times (and for the Jews is there any time that is not troublesome). Both Ezra and Nehemiah recorded the great trials experienced in their books. Josephus wrote of the troubles the builders encountered:

“When the Ammonites, and Moabites, and Samaritans…heard that the building went on apace, they took it heinously, and proceeded to lay snares for them, and to hinder their intentions. They also slew many of the Jews, and sought how they might destroy Nehemiah himself, by hiring some foreigners to kill him. They also put the Jews in fear, and disturbed them, and spread abroad rumors, as if many nations were ready to make an expedition against them, by which means they were harassed, and almost left off the building. But none of these things could deter Nehemiah from being diligent about the work.”

Josephus continued to write that Nehemiah made the workmen labor while wearing their armor. They always had to wear their swords with the shields within a few feet. A trumpeter was stationed every five hundred feet around the city to sound the alarm if there were attacking enemies. Finally, after forty-nine troublesome and agonizing years, the rebuilding of the city and the wall was completed in the year 396 BC, or seven prophetic weeks, just as Gabriel told Daniel. This left sixty-three weeks to be fulfilled.