If in your lifetime you have been blessed with a visit to Geneva, Switzerland you may have seen this monument: 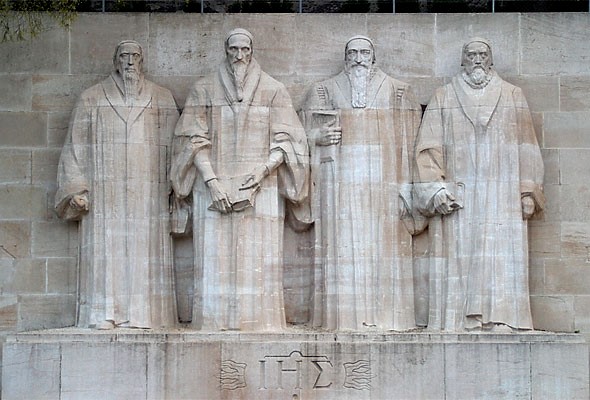 
Built in 1909 this is the International Monument to the Reformation or as it is more commonly known, Reformation Wall. Depicted at the center of this structure, from left to right, are:


William Farel (1489–1565) Farel was the founder of the Reformed Church in Neuchâtel, Berne, Geneva, and Vaud in Switzerland. Together with John Calvin, they worked to train missionaries across Europe.


John Calvin (1509–1564) It was in honor of John Calvin’s 400th birthday that this monument was commissioned. Calvin heavily influenced Presbyterian Church doctrine and Reformed theology. He began “Systematic Theology” with his book “Institutes of the Christian Religion.” John Calvin wrote one of the largest set of Bible commentaries during his time. He trained and sent missionaries across Europe.


Theodore Beza (1519–1605) Beza was a disciple of John Calvin. He would later became John Calvin’s successor in Geneva. By his continuing efforts the Reformed theology continued to be spread in France.


John Knox (c.1513–1572) Knox studied under John Calvin after being declared an outlaw in England by Queen “Bloody” Mary. He would later found the Presbyterian Church in Scotland.[1]


Along the wall on both sides of the central statues, the motto of both the Reformation and Geneva can be found engraved on the stone: Post Tenebras Lux (Latin for “After Darkness, Light”). On the central statues' pedestal is engraved a Christogram: ΙΗΣ.


The four statues were strong men of God whom He used to establish biblical churches which in turn changed the world.  Through a combination of Godly preaching of the Gospel and the systematic teaching of the Bible verse by verse these men introduced the world to a Bible that had been withheld from them for centuries. That Reformation continues to this day and needs again the renewed vigor of such men as memorialized there for so many in the world today so despise what these men preached and taught.

However, if you venture to Geneva today you will see a different monument: 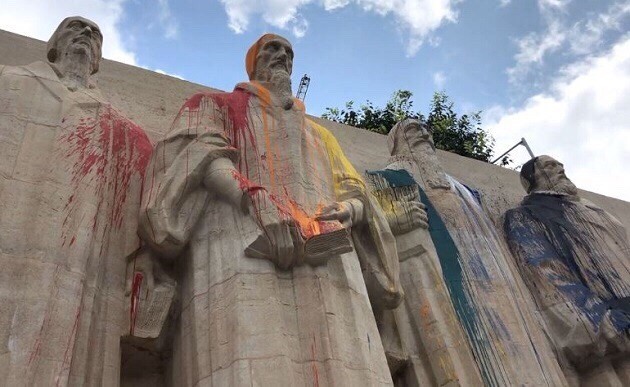 Rainbow paint vandalizing the monument. It appears that the paint has been thrown on in an attempt to create the symbol of a rainbow. At this time no one has claimed responsibility for the attack but police are investigating in an attempt to uncover the culprits.


This is not the first attack on Reformation Wall, in March, feminist activists wrote a graffiti on the wall reading, “Where are the women?”


The great Protestant Reformers labored to end idolatry and superstition. Many felt their greatest calling was to bring the Word of God to their fellow countrymen in their own language.  The Reformed battle cries: Scripture Alone, Christ Alone, Grace Alone, Faith Alone, Glory to God Alone stand in stark opposition to those who would usher in an age of Perversion Alone.

Maybe it is time the Latin phrase be changed to reflect the current culture: “Post Lux Tenebras”: After Light, Darkness.

[1] http://apostles-creed.org/history-confessional-christian-theology/the-reformation-monument/
at July 23, 2019 No comments: