Fast Facts on the Early Church Father, Polycarp of Smyrna 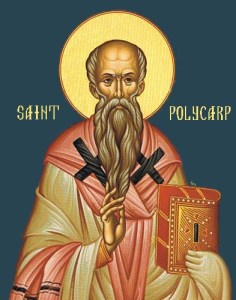 Fast Facts on the Early Church Father, Polycarp of Smyrna
by grace ye are saved, not of works,' but by the will of God through Jesus Christ . . . If we please Him in this present world, we shall receive also the future world, according as He has promised to us that He will raise us again from the dead, and that if we live worthily of Him, 'we shall also reign together with Him,' provided only we believe . . .[1] (What Polycarp lived his life and his theology by)

For 86 years I have served Jesus Christ and he has never abandoned me. How could I curse my blessed king and savior?[2] (In response to being asked to curse Christ and live. There is discussion if this means he was 86 years old or that it was 86 years ago that he became a Christian which would mean he was older than 86. Either way he was an older believer)

Hear me declare with boldness, I am a Christian.[3] (In response to being asked to acknowledge the spirit of the emperor. A recognition of pagan gods and religion)

FAST FACTS ON POLYCARP OF SMYRNA:[4]

Bishop of Smyrna, correspondent of Ignatius
Smyrna was a seaport city about 35 miles north of Ephesus. It has been described as the most beautiful of the seven cities. Today it is called Izmir, Turkey. Scripture does not give us any information concerning the founding of this church, nor is it mentioned in the book of Acts.[5] It is believed that this church was founded during Paul’s journey in Ephesus (Acts 19:10).
Polycarp led the church in Smyrna with wisdom and authority, having been appointed to leadership by men who were witnesses to the Lord. Frequently called on to settle disputes or correct false teaching since his teaching had been formulated directly from the mouth of an apostle. Other leaders of the early church valued his insight as well as they might considering his experience. At one point Polycarp visited Rome. During the visit the sitting bishop deferred to him as when to celebrate the Lord’s Supper. This demonstrated with what respect Polycarp was held.
Ignatius, bishop of Antioch and eventual martyr (108 AD, possibly 140 AD, scarce documents make the determination difficult) was imprisoned and transported to Rome in about the year A.D. 108, wrote letters to several of the ancient Churches. He also wrote a personal letter to his friend and fellow bishop, Polycarp of Smyrna.  Unfortunately the original letters and contemporary copies have been lost to antiquity. For the full content of the letter visit http://www.newadvent.org/fathers/0110.htm.
Ignatius wrote to Polycarp imparting wisdom to him in several categories. These included: How a bishop should behave, the duties of married Christian couples, care of widows, and the Christian communities in general.

Denounced Marcion as “Son of Satan”
Polycarp’s strictly adhered to the teachings of the apostles. This would become greatly demonstrated during his visit to Rome, most likely in 154 or 155. The heretic Marcion[6] had led many astray by his efforts to separate the church from its Jewish roots. Polycarp’s persuasive and doctrinally founded teaching turned a large number of the Marcionites (and also from Gnosticism) from their errors. When Marcion saw him he went up to Polycarp, looked him right in the eye, and said, “Do you know who I am?” Marcion was known for intimidating his opponents, however in this case he met someone who would not back down. He looked him right back in the eye and quickly retorted, “Yes, I know you very well, you firstborn son of the devil.”

Told that John fled baths where he saw Cerinthus
Is this story reliable? Where would Polycarp receive such information concerning the apostle John? According to early church fathers Irenaeus and Tertullian Polycarp was a disciple of the apostle John. We discover in the writings of the early-third-century theologian Tertullian that, according to “original records,” it was the apostle John himself who ordained Polycarp to that office.[7] The teachings and beliefs of Polycarp would have been founded by the apostle John. During the 86 years that Polycarp walked this earth he proclaimed and exhorted that knowledge handed down to him from John the Apostle who spoke what he learned from Jesus Christ. Polycarp would then pass it on to his own disciples. His teaching and his walk in this life was exemplified and demonstrated by those teachings. He would stand firm in his beliefs, as did many of his disciples, though it would lead to his martyrdom.

Rounded up as a leader of “the atheists” (non-believer in the Roman gods)
Persecution had broken out against Christians in Smyrna. Believers were burned, gored, fed to animals and had their heads removed from their bodies. Persecution was not a constant for the first three centuries of the church but it was a reality that needed to be recognized.
On a Friday afternoon Polycarp was resting upstairs in a country home. They Romans came in like a posse, fully armed as if they were arresting a dangerous criminal much like when they came and arrested Christ. Friends wanted to sneak him out, but he refused, saying, "God's will be done." (At this point in church history martyrdom had not taken on the belief of an automatic ticket to heaven. Martyrdom was not to be seeked out but if it happened be faithful to the end).
The story is told that Polycarp welcomed his captors. He spoke with them as if they were long lost, though wayward, friends. Polycarp ordered that food and drink be served while he made his one request: one hour to pray before they took him away. If this story is more than legend did the officers overhear his prayers, did they begin to have second thoughts? What a wonderful witness to those who had come to take him away. Never had they heard or experienced anyone asking for prayer as a request or invite them in for a meal.

Supposedly flames refused him; when speared, his blood extinguished the flames
Polycarp was burned at the stake and pierced with a spear for refusing to burn incense to the Roman Emperor. On his farewell, he said: "I bless you, Father, for judging me worthy of this hour, so that in the company of the martyrs I may share the cup of Christ."
The date of Polycarp's death is in dispute. Eusebius dates it to the reign of Marcus Aurelius, c. 166–167. However, a post-Eusebian addition to the Martyrdom of Polycarp, the authenticity of which has not been established, dates his death to Saturday, February 23, in the proconsulship of Lucius Statius Quadratus, c. 155 or 156. These earlier dates better fit the tradition of his association with Ignatius and John the Evangelist.[8]
There are various traditions associated with his death. These should be taken as traditions as the information on Polycarp is very scarce:
While these stories are just that, stories, we must realize the great faith and great perseverance of this man.  Polycarp is our first mentioned martyr post-New Testament. He demonstrates for us 2,000 years later what it means to stand for Christ and pay the ultimate price. He demonstrated what it means for the Christ and the Scriptures is the only true object we can rely upon in this life. He was offered his life for a simple pinch of incense and to speak a few words. He refused and paid with his life. But the eternity he inherited far outweighed anything this world has to offer.